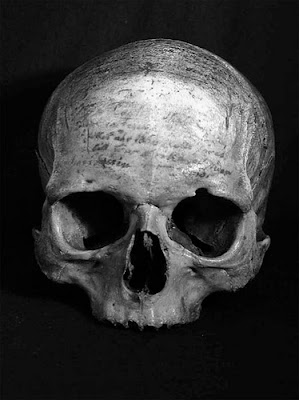 In September of 1649 René Descartes departed for Sweden to mentor 20-year-old Queen Christina in the field of philosophy. Just six months later, in February of the following year, he would die from a sudden onset of pneumonia.

The French philosopher's body might have remained to this day in a churchyard cemetery near Stockholm, but a French Ambassador by the name of Hugues de Terlon secretly exhumed it, put it in a copper coffin, and brought it back with him to St. Genevieve-du-Mont, Paris.

Unfortunately, this wouldn't be the last trip for the philosopher's remains ... for the next 350 years his bones would be "fought over, stolen, sold, revered as relics, studied by scientists, used in séances, and passed surreptitiously from hand to hand."

Along the way there were inscriptions made on some of the bones, especially the skull. One in particular, and the one this post is most concerned with, is the inscription across the forehead of his skull. It's a single quatrain written in old Latin cursive- apparently a poem that commemorates the high genius of the philosopher.

Although I'm quite familiar with Descartes and his background as a philosopher, my Latin's a little loose; and because I was dying terribly inside to know the contents of this poem, I had to exhaust every means at my exposal to obtain its meaning ... I tried broad spectrum internet searches, online translators, combed through a dozen books or so, I even sought out assistance on Facebook- all to no avail.

And then it happened ... I stumbled on a Google Books page that referred to a book written by Russell Shorto, Descartes Bones. In it, on page 146, was that very Latin poem transliterated into English. Needless to say, I was really excited! Here's both versions:
Latin

This small skull once belonged to the great Cartesius,
The rest of his remains are hidden far away in the
land of France;
But all around the circle of the globe his genius
is praised,
And his spirit still rejoices in the sphere of heaven.

How cool is that? I just wish I knew the exact history of the person who wrote this poem, the extent of their poetic inclinations, what poetic influences bore sway on them, and- considering they were apparently Swedish- why the choice of Latin.

Now the English version of this poem may not be the most impressive read in the realm of poetry, but you've got to admit, considering the history of Descartes as a philosopher and the 'travels' of his skeletal remains, the poem takes on an aesthetic relevance that makes ignoring it at least unworthy. Hence the post.
*****

As a side note, I feel a certain sense of shame that Descartes' remains were treated this way. This is a man whose philosophical position lends ontological primacy to soul over that of flesh; a man who has argued that the body is merely an extended thing within which we- the mind, or soul- act through, but are not intrinsically a part of.

Yet here we are- I say we as in we humans … yet here we are squabbling, stealing, selling, and superstitiously adoring the bones of a man who would laugh at the very thought of it. At least the author of the above inscription acknowledged that these “once belonged” to Descartes, and that the man- Descartes- occupies a place that is “in the sphere of heaven” (a latent suggestion of the dualism Descartes espoused).
*****
"This 'I' – that is, the soul, by which I am what I am, is entirely distinct from the body, and would not fail to be what it is even if the body did not exist."

In order to improve the mind, we ought less to learn, than to contemplate.
Posted by John W. May


This post is really informative to all kind of people. I am very happy to see the post. I will request you to give more information about this. I have gotten many knowladable speech form here. I have also website where you can get some knowledge which may be for your welfare. Visit here…..
poem

John W. May
My longstanding interest in philosophy and theology- both sparked by my interest and belief in God- are what brought me to poetry, hence here. 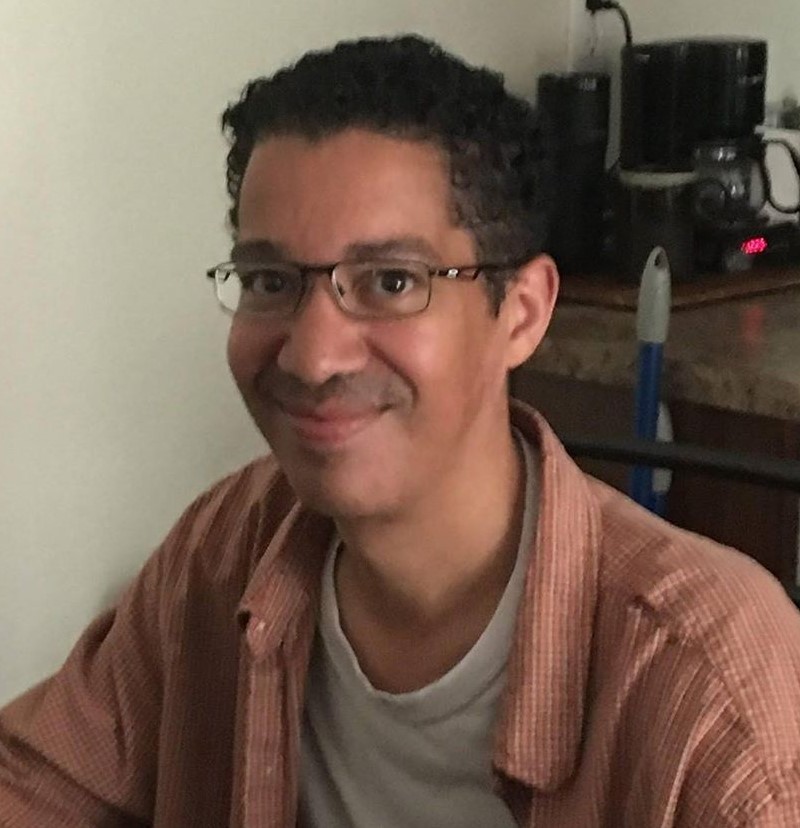 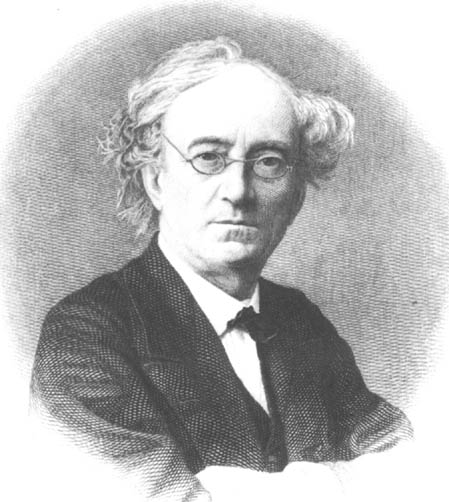 Glum is the Sky

Glum is the sky, by night imprisoned,

As over it the dark clouds creep,

Not menacing or wistful is it,

But plunged in dreary, torpid sleep.

Alone the streaks of lightning, bursting

Through cloud and shadow, seem to be,

As they flare up and blaze, conversing

As at a signal, for an instant

From out the murk the forests distant

But the light dies, the darkness fleeing

That cloaks the startled, wakeful sky,

And all is still… Is a plot being

Hatched in the silent wastes on high?.. 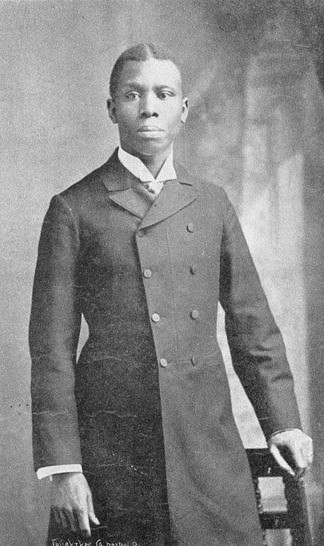 I Found you and I lost you,

All on a gleaming day.

The day was filled with sunshine,

And the land was full of May.

A golden bird was singing

I found you and I loved you,

And all the world was mine.

I found you and I lost you,

All on a golden day,

But when I dream of you, dear,

It is always brimming May. 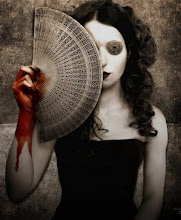 Poetry must have something in it that is barbaric, vast and wild. 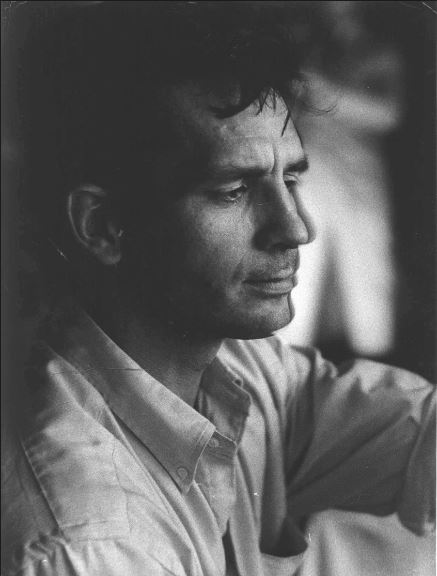 Don’t use the phone. People are never ready to answer it. Use poetry. Take pen and paper, and scribble words so utterly moving that whosoever reads them believes that the world is shaking and that, somewhere, mountains are crumbling. 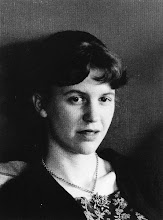 And by the way, everything in life is writable about if you have the outgoing guts to do it, and the imagination to improvise. The worst enemy to creativity is self-doubt. 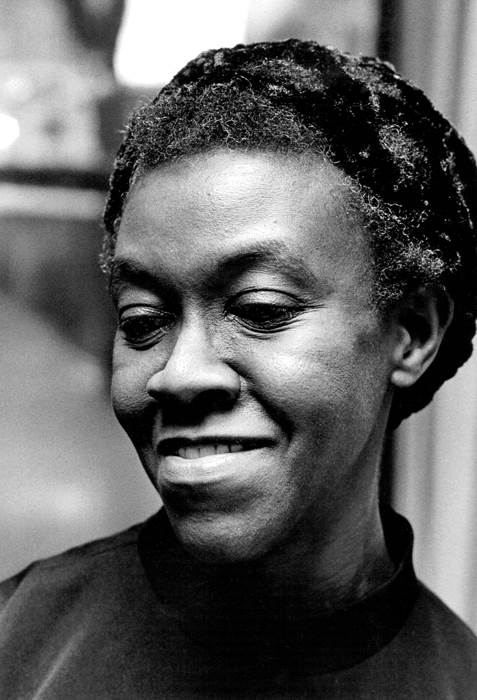 Writing is a delicious agony. 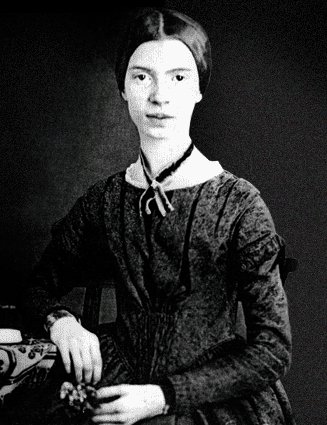 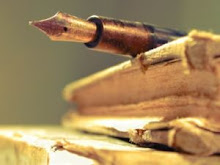 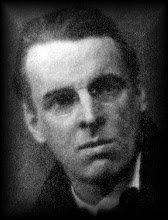 But I, being poor, have only my dreams; I have spread my dreams under your feet; Tread softly because you tread on my dreams.